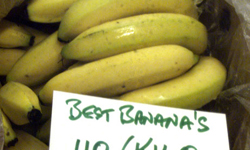 In the second of a monthly series, Elen Lewis, The Marketing Society’s editor offers some guidance on better business writing. This week, some rules on apostrophes.  These strokes of genius are woefully ignored and scorned by greengrocers trying to sell apple’s and banana’s and many more besides.

When Barack Obama visited Ireland on his way to the UK recently he made a joke about punctuation. “My name is Barack Obama, of the Moneygall Obamas and I’ve come home to find the apostrophe we lost somewhere along the way,” he said.

Marketing Society Fellow Gerry O’Donnell, director of Famous Grouse asked me to write this column. He’s sick of the way website registration pages scorn the apostrophe. ‘Is there any hope or do I have to change my surname back to Son of Donnell?’ he writes.

Apostrophes matter. Just ask John Richards, the chairman of The Apostrophe Protection Society. This is a father-and-son operation whose favourite occupation is to write to offending shops and restaurants with a letter that begins: ‘Dear Sir or Madam, Because there seems to be some doubt about the use of the apostrophe, we are taking the liberty of drawing your attention to an incorrect use.’

The apostrophe isn’t an arbitrary mark, but, like its use, in ‘it’s’ meaning ‘it is’, it marks a missing letter. In Anglosaxon, possession was expressed by the genetive case: “Godes engel” meant “God’s angel”. In time, the ‘e’ was dropped and the missing letter marked by the apostrophe.

Here are some simple apostrophe rules for you.

But, as this is English, there’s a rag-bag of awkwardness. The words in some set expressions have become so tied together that there’s no apostrophe. So we have “Brussels sprouts” where you might expect “Brussel’s sprouts” and “Achilles tendon” but “Achilles’ heel”. Names can be similarly wayward. On the London underground there’s “St James’s Park” but “Earls Court”.

A few years ago, Radio 4 broadcast a trio of short stories ‘The Greengrocer’s Apostrophe’ about an obsession with punctuation. One character explained that what she cherished about the apostrophe was how, “that little flying comma gentles life along”. To say, “I cannot” or “I do not” sounds so bossy, she said, whereas saying, “I can’t” or “I don’t” is “wistful, apologetic almost”.